Posted on October 8, 2018 by walkingtotheend

Sorry a bit late with this blog entry – writing this on Sunday afternoon.

After another full English breakfast we checked out of our great accommodation in Keswick after 3 nights and drove into the town for Cath’s hairdressing appointment at 930am. Whilst I waited for Cath I enjoyed a coffee in the same cafe I had been to 2 years earlier with the the LeJog team. For the LeJog guys reading this it was the one in the centre of Keswick that kindly gave us our drinks for free to support us remembering John early on the morning we rode out of Keswick.

We got away from Keswick around 11am and had a break at the Mainsgill Farm shop as we passed between the wilds of the Northern Pennines and the Yorkshire dales. This was an amazing set up with everything you could imagine for sale including organic and locally grown meats and produce. We had shredded beef and onion gravy inside a Yorkshire pudding plus lots of vegetables for a major lunch. We could not imagine we would need dinner after that.

Arrived at our pub accomodation in York around 3pm.

York is a well known historic town with endless Roman, Anglo Saxon and Norman buildings, town and institution walls, gates and moats. Plus of course the famous York Minster ( cathedral / church) which is the biggest we have ever seen anywhere.

Also, there are hundreds of shops, cafes, museums and unfortunately thousands of people in every nook and cranny.

Our first problem was finding somewhere to stop the car so we could check in and then a place to leave the car for the 2 nights we have planned to be in York.

Our choice of accommodation turned out to be the worst decision we have made in these current travels.

First, we had to check in at the pubs bar which was full of raucous drinkers and I was struggling to hear anything. We had to pay up front and were then shown our room on the first floor directly above the bar. Bedding and towels were looking very old, the main light in the room did not work and generally the room was due for some renovation in the 1960’s but was still waiting.

We sighed and accepted it as part of the adventure and went out for a walk to watch the soccer in a pub somewhere. Manchester United looked like losing so we came back to watch the rest of the game in the White Swan (our pub) but could not get in the bar door as there were two young ladies fighting on the floor and it was too hard to step over them. We went direct to our room via a side door then proceeded to watch what was happening from our window as the police arrived.

Eventually the entertainment ended and I went and bought some snacks from Sainsbury’s across the road all the while carefully watching my step. We finally got to bed around 9ish only to be further ‘entertained’ by the juke box directly before our room until midnight.

It is now Sunday morning and upon getting ready for the day we discovered dirty marks on my pillow and some of the bedding (not from me). That was enough, we packed up and left leaving the keys on the bed for them. Two nights accommodation paid for but we could only put up with one. I will be authoring a appropriate review on booking.com in the next few days.

Manchester won in the end so the day was not too bad after all. 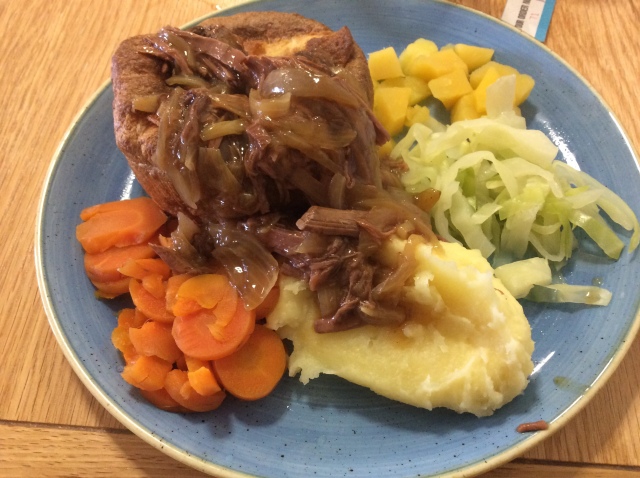